59club team up with CourseMate

Golf Clubs: Just what are you thinking??? 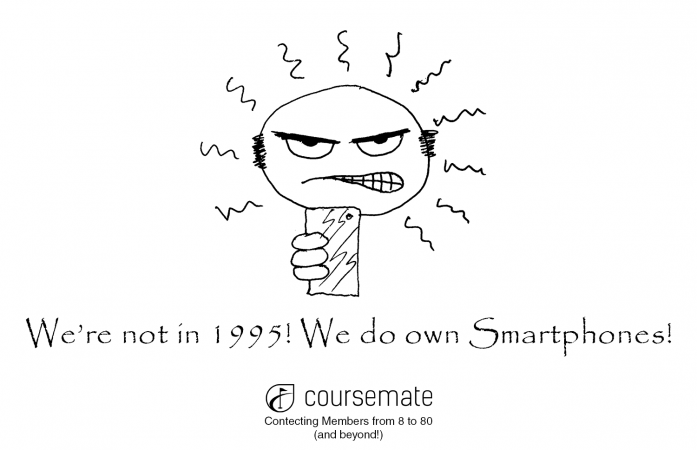 This is the era of the mobile technology and app. But for unexplainable reason, some people in the golf industry doesn’t seem to think it applies to them.

In every other industry, businesses are growing, gaining greater revenues and improving their customer’s interaction with their company with the smart, sensible and business savvy use of mobile technology. Just what is the reluctance for the club industry?

Having spent over 2 years researching, speaking with clubs, golfers, pros and their advisors, plus writing numerous articles for golfing magazines and association bodies about perceptions, limitations and need for change, we discovered the main reason for resistance was lack of knowledge on the subject and fear of trying something “new” – the most popular reasons are;

“We don’t need apps”
These are probably the very same people that said that they did not need websites 5-10 years ago… Whilst it is true that a number of clubs still do not allow the use of mobile phones on the course, a smart club app is more than a course guide, GPS hole locator and a scorecard!

Golfers can use it book their tee times, see latest scores, enter tournaments and events and benefit from the latest promotions… and none of these actions are done out on the course.

Most clubs have relaxed the rules to allow the use of mobile phones on the course to allow the golfers to use their own golfing apps. Which means your club knows there is a need for a GPS hole locating, course guide along with its scorecard, but seem to prefer get your valued member pay for apps like Sky Caddy and Hole 19!

Wouldn’t it make far more sense for a small investment (less than your retail price of a cup of coffee per member) to enable your club have its own professional app that gives those features to them for free, plus gain the other benefits your app offers like data collection, push notifications, increased revenues and turn outs – and not to mention, making it quicker, easier and more fun for your members and visitors!

“Our members wont use apps”
Below is statistics taken from golfers using our CourseMate app over the summer. It shows what % of golfers that download the app that have used their club’s CourseMate app EVERY WEEK over the past 3 months. 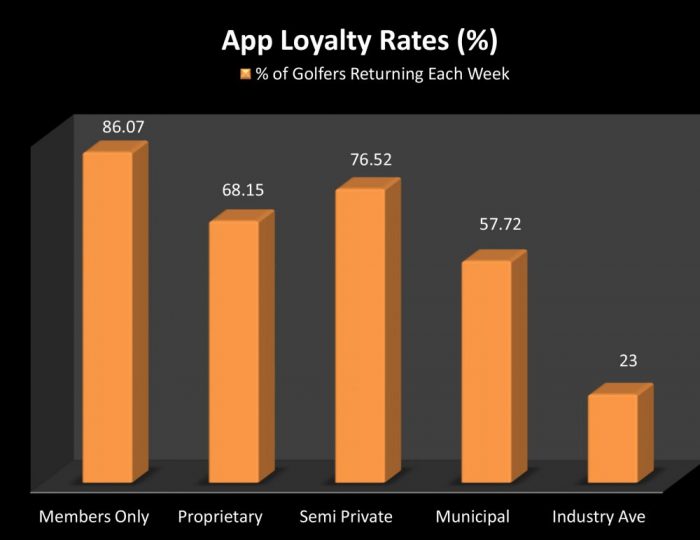 So as you can see – this clearly ISN’T the case! Members’ only clubs (so those “old” golfers you say “really won’t use it”) are not only using it, but are more loyal to their club app than than us younger golfers!

“We’ve tried it”
Your course has one of those free or low cost web apps and it didn’t get many downloads and those that did download it, abandoned it shortly after, making it virtually useless as a business tool. Just as the old adage says: buy cheap, buy twice.

We all know that a cheap, poorly constructed app can damage the reputation of a club – so much so that a number of GM’s confided in saying that not only do they not have this app on their own phones, but they disliked it so much that they did not promote it! (Which makes me wonder why they said yes in the first place…?) that those that have been fooled by hype into getting an app that wasn’t right for their club fear getting another app. And now their club and members are suffering because of it.

“We’ve tried it – Again”
This, I feel, is even worse: I have had “we have a low cost web app and it isn’t being used so we are adding more features to it.”

Upon asking why they thought it wasn’t being used, I consistently got two answers:

“I don’t know” and/or
“because its s**t”
But yet somehow, they have put all business (and common) sense aside and added more features to the app and then seem mystified why it’s still not being used….

Surely the correct thing to do is fix points 1 and 2 by speaking to your members and having a profession app created with both the golfer and club in mind?

Be sensible, be smart
Your club (I hope!) doesn’t still have the first website it had created and I’m sure you haven’t just added more and more pages to it in hope that it “fixes the problem” so why do it with your club’s app? Surely your club deserves a new, better app that will be used as you intended.

Apps are not about change they are about improvement.
Communicating quicker and more efficiently with your members,
Creating and adding to your community
and make the lives of your members (and visitors) easier and more engaging.
With the intelligent use of today’s technology (web/apps/social media) all golf businesses can reach their audiences like never before. They can interact and gain loyal following and increase all areas of their business.

Here at CourseMate we understand that every golf business needs its own personalisation because we know that they have their own visions, criteria, different resources and targets that they wish to meet.

Therefore you need a tailored approach upon how to reach your audience and this is where CourseMate can really help – it’s proven, it’s flexible to the growing club and it’s created with your club and your members (and visitors) in mind.

Fill out our short form for a free, no obligation consultation and get the app your club deserves

59club team up with CourseMate 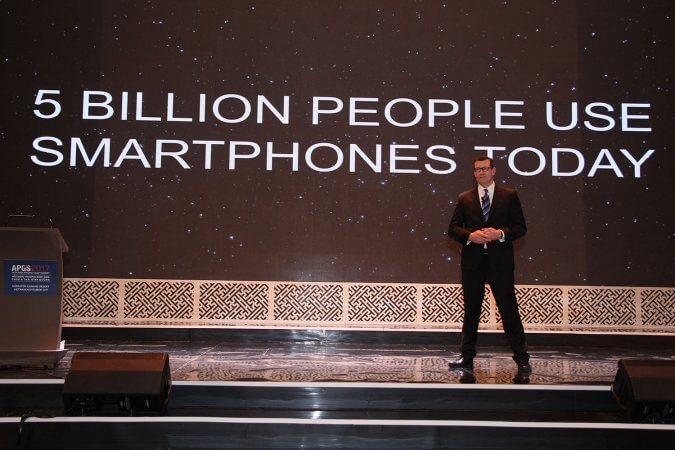 Top 10 Tips for Investing in an App

You can find out more about which cookies we are using or switch them off in settings.

This website uses cookies so that we can provide you with the best user experience possible. Cookie information is stored in your browser and performs functions such as recognising you when you return to our website and helping our team to understand which sections of the website you find most interesting and useful.

Strictly Necessary Cookie should be enabled at all times so that we can save your preferences for cookie settings.

If you disable this cookie, we will not be able to save your preferences. This means that every time you visit this website you will need to enable or disable cookies again.